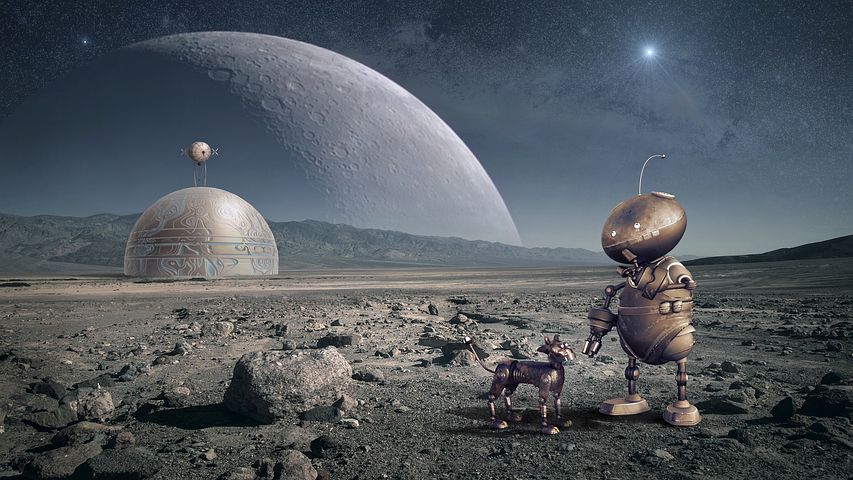 Since his adolescence, Jeff Bezos, the CEO of Amazon, used to plan hotels and amusement parks with colonies for two or three million people around Earth, immagining our planet in the future as a big natural park, preserved from pollution with the majority of the population transferred in the sub-orbital space.

In 1865, Jules Verne, in his novel called “From the Earth to the Moon” foresaw moonlanding and with his zealous fantasy, laid out many features of the mission such as dimension of the spaceship, launch site and the return to Earth through mooring about 100 years before it took place in 1969. In Stanley Kubrick’s famous movie, 2001: A Space Odyssey (1968), a space mission towards Jupiter starts from an enormous lunar base calle Clavius.

Although the fantasy of venerable sci-fi writers, and famous entrepreneurs- has prefigured a part of the reality of our futurem including businesses, it still seems unlikely to us to think about space trips or to trade goods and services in space in the next decade.

However, Jeff Bezos and Elon Musk (founder of Paypal and Tesla) have created operative companies in the future tourism business and international space commerce since long, with the former aiming towards Moon and the latter towards Moon and Mars.

With his company named Blue Origin, Jeff Bezos has indeed manufactured a sub-orbital rocket, New Shepard, which will carry tourists in the orbit around Earth around 2025. The estimated cost will be 200,000 dollars per person; a cost which few people can afford for an 11-minute journey in the absence of gravity while the price will obviously diminsh as did the airplane trip costs at the beginning of the 20th century.

The next step for Bezos will be to organize trips and deliveries on the Moon which he imagines to be a future industrial and commercial outpost. There is more to this venture with human trips to Mars, planned by Elon Musk around 2030… but that’s not enough!

The company Express Moon has obtained a license from the Federal government of the United States to begin the ice extraction process on the Moon. The Moon contains notable stocks of ice which can allow life on its surface and thereby the extraction of minerals such as rare soils which have a vital role in advanced industries (almost all the existent stocks are currently in the territory of China), Helium-3 which is useful in nuclear fusion reactions and Platiunm which has a key role in electronic industry.

All precious and fundamental elements for our technological progress which can be extracted from Moon or other planets, just as it happened during the Gold Rush in the 19th century. This can also lead to the discovery of new and unexpected raw materials, just as was the discovery of oil which led to the automobile industry.

It can certainly happen that an industry located in the free State of Moon start to sell a load of rare soils through #smartcontract to an Italian electronic security device producer with FCA delivery at the international spaceport of the moon with FCA return of the goods according to #Incoterms © 2040 of #InternationalChamberofCommerce, duly adequate to the new reaity of the international space commerce.

Therefore, we must be prepared from now to regulate correctly for space law that can take our experience on Earth into account in order to be able to take the best of mankind into space.